The purpose of the Core Strategy of the Plan is to set out a clear vision for the citizens of the City as to how the City will be developed in a sustainable and properly planned manner. The Core Strategy has been a mandatory objective for the Development Plan since 2010. It frames the overall policies and objectives of the plan and is based on population, housing and job targets and must be consistent with National and Regional Planning policy. The core strategy must consider what land is adequately serviced and can be delivered for development over the life of the Plan.

Under the core strategy of the current Plan, a spatial hierarchy for the City has been established with the primacy of the City Centre recognised, complemented by a series of Strategic Development and Regeneration Areas, Key District Centres and three large Strategic Development Zones at Grangegorman, North Lotts & Grand Canal Dock and Poolbeg West.

The City has seen significant development in these areas over the last number of years, and since 2016, over 10,000 planning applications have been processed by the City Council. There has been significant office and residential build out in the Docklands and the consolidation of Grangegorman as the new campus for TU Dublin is ongoing.

There has also been significant activity in Clongriffin/Belmayne and Pelletstown for housing development and associated amenities. Over 40 Strategic Housing Developments (SHDs) have been granted on infill brownfield sites throughout the City. The vacant site levy has been successful in activating a number of sites. 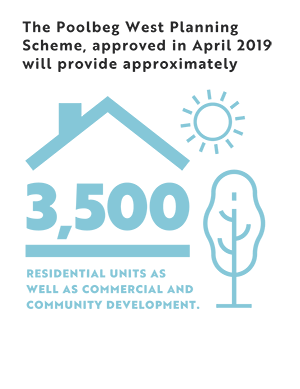 regeneration areas. A strategic review of all low intensity industrial areas of the City has been carried out culminating in the rezoning of a number of sites for more intensive residential and mixed use development.

"Dublin City Council has been successful in securing government funding under the Local Infrastructure Housing Activation Fund and the Urban Regeneration and Development Fund to further facilitate key urban projects throughout the City."

There remain however, large areas of the City, well served by existing and proposed infrastructure and public transport that remain undeveloped or underdeveloped. Concentrations of underutilised lands are evident in a number of areas of the City such as the Liberties, the North East Inner City and the Naas Road area. Investment in our urban villages and district centres has been limited. The objective of the next Plan will be to ensure the continued consolidation of the City and that new opportunities presented by continued investment in public transport including key projects such as Bus Connects, Luas extension and Metro are fully maximised.

These additional public transport corridors are likely to be transformative, changing the shape, accessibility and mobility of our capital City well into the future. The Plan will set out at a strategic level the key locations for future development and direct what the appropriate land use mix should be including housing, employment, physical, social and community infrastructure. The delivery of compact growth that aligns with national and regional planning policy, alongside sustainable mobility and climate resilience will be key elements of the next Core Strategy for Dublin City.

It is envisaged that the ongoing development of the Strategic Development Zones (SDZs) at North Lotts & Grand Canal Dock and Poolbeg West, and the Strategic Development Regeneration Areas (SDRAs), as well as the continued repurposing and redevelopment of brownfield and former industrial lands through the City will accommodate much of the future growth needs of the City. There will also be a need to further invest and encourage the ongoing regeneration of our urban villages and city neighbourhoods as focal points of the existing and new communities that they serve. The development of high quality, well designed neighbourhoods with adequate social infrastructure will be key to ensuring the sustainable and managed growth of the City.

The growth strategy of the next Plan must accord with the overarching principles set out at national and regional level to facilitate compact growth and the alignment of future development with public transport infrastructure. The Plan will need to consider and review what other redundant and underutilised lands should come forward for development over the lifetime of the Plan and how such lands should be planned, serviced and developed. The most appropriate planning mechanism to guide the future development of such lands will also need to be considered, for example an LAP, Planning Scheme etc. The Plan must ensure that these lands are integrated successfully into the structure of the City and that their strengths and opportunities are optimised.