Dublin is an international city of scale and gateway to the European Union for many businesses. The City is a major economic driver for the state. Dublin is seen as an attractive place to work and invest in. The City in recent years has experienced an upward trend in economic performance. The jobs ratio (total number of jobs divided by the labour force) which is used as an indicator to measure the sustainability of settlements, is 0.978, higher than the state average for settlements which is 0.86 (Source NPF, Appendix 2). Labour Force participation rates are relatively high at 64.7%. Highly skilled workers are attracted to Dublin for its many career opportunities.

Foreign Direct Investment (FDI) continues to play a significant role in the city economy. According to the World Bank’s ‘Doing Business’ Report 2020, Dublin is ranked no. 2 globally for ‘business friendliness’ by FDI. Dublin is home to some of the most influential multinational corporations, with substantial clusters in technology, finance and professional services. Within Dublin Docklands, there are now over 500 firms operating, including more than half the world’s top 50 banks and top 20 insurance companies. Dublin is also a major global hub for fund administration, aircraft leasing, insurance and a range of wholesale banking activities.

The City is also considered one of the leading research, development and innovation locations in the world and is home to some of 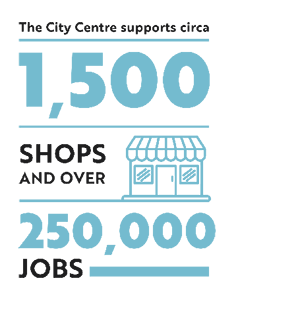 the country’s top universities. Dublin received almost $1.6bn in Research and Development (R&D) investments in the five years to September 2017. The Smart Docklands District, launched jointly by Dublin City Council and Trinity College Dublin’s CONNECT research centre in 2018 is an innovation quarter that will include public spaces to allow workers to connect with the start-up community as well as with university students and is an example of continued investment in the City ensuring that Dublin is ready for the future. The City’s commercial, political, higher educational and social environment makes it the ideal location for companies to carry out successful and profitable Research Development Investment activities. Four of Forbes’ top 10 World’s Most Innovative Companies 2018 – Workday, Salesforce, Amazon and Facebook have offices in Dublin.

There is recognition however, that the City has a number of vulnerabilities in terms of maintaining its competitiveness. A shortage of quality affordable housing remains a challenge and Dublin is among the top five most expensive cities to rent in Europe. There are also geographical areas across the City where high levels of deprivation exist and ongoing targeted measures will be required to address this spatial imbalance of economic investment. Climate change, shifting international tax regimes and Brexit also bring uncertainties to the economy.

The Covid-19 crisis however, is the biggest challenge and is likely to trigger significant economic impacts for the short to medium term. The longer term impacts on the City’s economy are as yet unclear; however, ongoing restrictions in terms of international travel may restrict the movement of both labour and capital between countries, thus having implications both for new FDI and for mobile workers. There may also be long lasting implications for some sectors such as discretionary retail, tourism, hospitality and personal services. There is also likely to be implications for the office market and for third level institutions and the international student market.

The forthcoming Plan must support investment and the creation of high quality jobs, at sustainable locations in close proximity to housing, public transport, high quality amenities and infrastructure. An integral part of the RSES is the Metropolitan Area Strategic Plan (MASP) and this sets out guidance regarding the re-intensification of employment lands within the M50 and at selected strategic development areas.

The MASP identifies a number of locations within the City which are targeted for economic growth to be developed sequentially in tandem with supporting infrastructure and services. In particular, the MASP places emphasis on the importance of Docklands, Poolbeg and North East Inner City (NEIC) as locations for the further development of people intensive high tech and servicesbased business districts. The MASP also recognises the potential of locations where clusters of economic development, employment and innovation in the fields of health and higher education can be encouraged including the Diageo lands, St. James Hospital/Dublin 8 and the Grangegorman campus of TU Dublin.

The economic strategy set out in the RSES also promotes 3 key themes - smart specialisation and clustering policies to develop a strong economic base in the Region, underpinned by investment in ‘placemaking’ to create places that are attractive to live, work, study, visit and invest in. The need to future proof and address emerging global development and challenges, such as Brexit is also identified. The forthcoming Plan must align with these key economic principles and the growth strategy set out under the MASP. The Plan must ensure that the resilience of the City is maintained and enhanced and that Dublin is promoted as a national economic driver and a globally competitive internationally linked City. The Plan must also align with the Dublin City Local Economic and Community Plan which sets out a series of high level goals and actions that will underpin economic growth in the City.

The forthcoming Plan will need to consider how the sustainable growth of the City economy in the right locations to the benefit of all sectors of society can be supported. Opportunities will need to be created to attract internationally mobile investment as well as supporting Irish owned businesses and small and medium size enterprises (SMEs). There will need to be ongoing support for innovation, research and development as well as the continued development of skills, talent and services that attract employers to the City. The role of third level institutions must be enhanced and supported. The forthcoming Plan must ensure that the City is a place where people want to live, work and invest through the provision of good public services, high quality social and physical infrastructure and sustainable and active travel facilities.

Tourism is also an important sector of Dublin’s economy and has many spin off benefits to the local economy. Failte Ireland estimate that in 2019, Dublin welcomed 6.3m overseas tourists and 1.7m domestic trips, generating a total spend of €2.1bn and supporting 65,000 jobs. There has been significant investment in tourism infrastructure in the City in recent years including a number of new visitor attractions such as craft distilleries with visitor centres and the Irish Emigration Museum (EPIC) on Custom House Quay. Bord Fáilte have implemented a number of initiatives to boost the tourism profile of the City including the Docklands Visitor Experience Development (VEDP) Plan and investment in festivals. Visitor orientation has been improved through wayfinding and public realm measures. The Plan will aim to promote and facilitate through appropriate policy/ objectives the development of sustainable tourism throughout the City and to further enhance and develop the existing tourism product.

The City Economy – Some Key Questions

The office of Mayor in Ireland has suffered with the clawback of rights from city and county councils for major corruption. The city of Dublin is a sizeable part of the economy of the nation and...
Read more
View full submission
Rent needs to be brought under control as a priority. Increasing supply, including encouraging, or if possible, instructing, land owners to upgrade or renovate derelict properties could be a lot to...
Read more
View full submission
Scroll to top